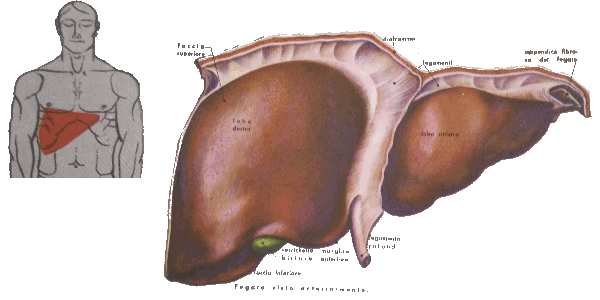 Liver cryosurgery for primary or methastatic cancer requires the insertion of thin needles - the cryoprobes - inside the tumor under CT or ultrasound guide. Cryosurgery has recently been revamped as an effective technique (4) to become comparable to radiofrequency and microwaves, when not even preferable (9). Compared to other methods that use heat, cryosurgery can be performed without general anesthesia, under local anesthesia and can be applied even near the large vessels, the hepatic dome or near the chest wall (1), (3), (6), (11), (14).

The liver is the largest gland in the human body, and it has both endocrine and exocrine functions. Located beneath the diaphragm, on the right side of the body, it is adjacent to the stomach and the transverse colon. It also produces bile to emulsify fats, and it is also responsible for metabolising carbohydrates and proteins, and more.

This gland is responsible for many other functions such as metabolising lipids, destroying haemoglobin and several toxic substances, converting ammonia into urea and it works as a deposit for substances such as iron and copper.

Benign tumorous forms that are most often encountered in the liver are adenomas and angiomas; hepatocellular carcinoma is on the other hand the expression of malignant forms, together with metastasis caused by other so-called primitive tumours.

Tumorous disease is usually discovered by ultrasound, CAT, or NMR scans, often in normal investigations for other cancerous pathologies; in fact liver cancer is generally asymptomatic in the initial stages.

The various tumorous stages of this organ determine its operability or inoperability, since several other complaints, such as cirrhosis of the liver undermine its functionality, and this prejudices the possibility of partial removal.

Technological developments in general and several studies performed on hepatocellular carcinoma or hepatocarcinoma (HCC) have widened the perspectives for treatment techniques that can be used in several situations. One recent publication (October 2016) stated it could advise either partial resection of the organ or cyroablation based on biological markers present in the blood7. Ignoring the limited cases os transplants, cryosurgery has been reconsidered as a plausible technique to the point of being comparable to radiofrequency in terms of effectiveness4, or even preferable to radiofrequency or microwave treatment 9. Compared with other systems that use heat, cryosurgery does not need deep anaesthesia, and can be applied close to major vessels, at the dome of the liver or close to the thoracic wall1,3,6,11,14.

Studies performed in many centres scattered across the globe demonstrate that cryosurgery:

Cryosurgery may be applied in the liver by introducing fine needles under local anaesthetic, with or without sedation2. These fine needles are called cryoprobes and enable ultra-low temperatures to be generated in the tumour (down to -180°C), which kill the tumour cells in a controlled, rapid and efficient manner. Patients can be discharged in 24 hrs. More than one tumour can be attacked and destroyed in a single session.