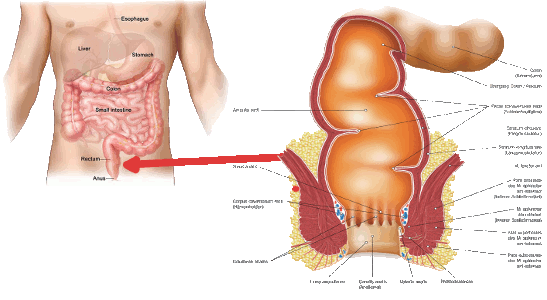 In the therapy of intestinal neoplasms, both for original tumours and for metastasis - or recurring ones, treatment is possible by means of cryosurgery techniques under CAT or ultrasound scan guidance. Tumorous points are identified, cryoprobes are inserted within the tissues involved and they necrotise them, making them inactive. In the space of a few weeks or months, the tissue from the tumours will be reabsorbed by the body, with no need to remove them surgically.

The intestine is the organ responsible for the digestion of food and the absorption of nutrient substances, and it forms part of the digestive apparatus. In substance, it is shaped like a tube, of an average length of 7 metres, even though it can be more than 10 metres long. It has a variable diameter and is folded over upon itself several times.

The organ is divided into separate parts:  the small intestine and the large intestine.

The last section of the small intestine (the ileum) is linked to the first section of the large intestine, known as the blind gut. The large intestine is divided in turn into the blind gut, the colon and the rectum. Of the three, the colon is the longest and most easily recognised; it is broken down in turn into the ascending, transverse and descending colon, forming that part of the intestine that goes up from the right side up to the level of the stomach, and then reaches the left of the body before descending along the side to become the back passage.

Because of this physiological form, the small intestine is subject to various disorders involving its motility and various kinds of blockage. On the other hand, the large intestine is more subject to the formation of both original and metastatic neoplasms.

Original neoplasms derive above all from tissue lesions caused by adenomatose polyps. The probability that those polyps will develop into a tumorous form is in due proportion with its size.

In this case too, only a small percentage of cases of colo-rectal cancer displays symptoms, be they various kinds of pain, or the presence of hidden blood in faeces. Until a few years ago, that form of tumour was often discovered late and, in 3 cases out of 4, presented metastasis in the liver.  Nowadays, prevention has a fundamental role on the population deemed to be at risk: colonoscopies and check-up palpation (three quarters of rectal tumour forms can be identified through palpation) form the foremost means of diagnosis. Ultrasound scans help to understand the level of penetration of the tumour as regards the intestinal wall and the lymph nodes, and a blood test to analyse CEA values can help in understanding the aggressiveness and the extent of the tumorous form.

Tumours of the rectum in particular, can give rise to metastasis at the level of close lymph nodes, or else they can spread locally into the fatty tissue that surrounds the rectum itself.

Once the tumour has been removed, both in the local lymph nodes and in the adjoining fatty tissues, they can recur over time.

The classical approach is obviously made up of surgical removal, strictly combined with chemotherapy and/or radiotherapy or biotech medicines.

Cryosurgery has its place in the treatment of these cancers, in cases where patients are not candidates for surgical removal, either because of high degrees of concurrent disorders, or by the nature of the tumour itself. In order to be able to remove a tumorous formation, an “oncological margin of safety” needs to be considered which provides for the removal of a portion of surrounding tissues, in order to avoid omitting any potential infiltration by tumour cells in the immediate vicinity of the original mass. However, it is not always possible to apply this margin given the proximity of major arteries, glands or bones. Accordingly cryoablation enables operations in such cases (1, 2), both as a palliative for pain and for the control of bone metastasis in the sacral region (2, 3).

Both the original tumour and the metastasis or the recurrence, can thus be treated by means of cryosurgical techniques under CAT or ultrasound scan guidance. Tumorous locations are marked, and then cryoprobes are inserted into the tissues involved, which will necrotise them and make them inactive. During the space of a few weeks or months, the tumourous tissues will be reabsorbed by the body without any need for surgical removal.

The patient can be discharged on the day of the operation itself or the day after, continuing to undergo cycles of chemotherapy, radiotherapy or immunotherapy as required (4).