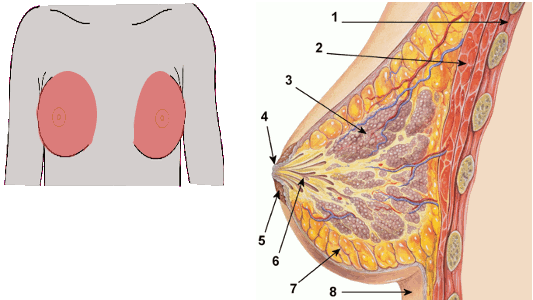 Cryosurgery of benign tumorous lesions (fibromas) and malignant ones (generally adenocarcinomas) of the breast, is performed by inserting thin needles called cryoprobes into the tumour under ultrasound scan monitoring. Ice balls are produced that encapsulate the lesion and cause its necrosis. Then the dead tissue is naturally reabsorbed leaving a small fibrous kernel in its place. Since these are percutaneous procedures, there is no surgical scarring.

The breast is an organ located in the upper part of the thorax and it is mainly made up of a combination of glands and adipose tissue. Various glandular structures, called lobules, radiate from around the nipple. On average there are eighteen of these structures, and they produce breast milk. The lobules are joined to each other and also to the nipple by the lactiferous ducts.

In this case too, neoplasms in the breasts are asymptomatic in the early stages; in fact benign cysts generally cause any pain felt. In every case, prevention plays a fundamental role since palpable tumorous forms are usually indicative of cancer that is beyond stage zero. Constant gynaecological and self examination (such as self-exploration) are most important to identify potential cancer in time. Undergoing check-ups arranged by the reference gynaecologist physician that mainly consist of mammograms and ultrasound scans, is therefore recommended.

If self-examination, or the mammogram or ultrasound scan have made a positive diagnosis a biopsy is taken of the mass identified, in order to perform cytological and micro-histological examinations so as to ascertain its nature and characteristics. Statistics on this topic show five year survival of 98% if the tumour is identified at once, that is at stage 0.

Breast fibromas can be treated surgically by removal or minimally invasive techniques such as cryosurgery.

Adenocarcinomascan be treated surgically or using minimally invasive removal techniques. In the first case a quadrantectomy is usually performed, that is, the partial removal of the breast tissue involved and of a “sentinel lymph node”, or via mastectomy, that is the more or less destructive exeresis (removal) of the breast according to the gravity of the condition;

According to each case (2), (3), (11), minimally invasive techniques can be a valid replacement for surgery (10), since they permit the full cure of the condition and they preserve the aesthetic aspect of the organ. In the case of cryoablation we have a technique that has been in use for several years now in the United States and in other countries, and where the capacity to completely neutralise the tumour tissue from the breast has been observed as being the equivalent of that of the traditional technique (10). Furthermore, it is well regarded for its simple method of execution, the absence of pain, the low level of complications, and for the typical immunological effect of cryoablation (9).

The patient furthermore, can return home on the same day of the operation; in the course of the following weeks and months, the mass involved with the low temperature will be reabsorbed by the body, giving rise to a reduction in size or even the total disappearance of the cancer (1) or of the fibroma (8). Fear is minimised, as is pain (which is almost completely absent), whilst the aesthetic result is considered excellent, to the extent that cryoablation is considered to be one of the most effective treatments of fibroadenomas (8).

Even in metastasised and/or painful forms, it is considered to be an excellent surgical solution. The effectiveness of the operation, which is tolerable in the case of a high degree of concurrent disorders, enables cryosurgery to be used to handle forms of metastasis and the pain connected with themn(4), (5). The combination of cryoablation with hyperthermia in the treatment of cutaneous metastasis also seems to be a winner (7).

An Italian study has recently compared the level of effectiveness of radiofrequency ablation (RFA is another minimally invasive technique for the thermal ablation of tumorous tissue) with cryoablation (CA) and, even if the level of efficiency of removal is equal, CA is preferred precisely because of it palliative effect on pain (5).