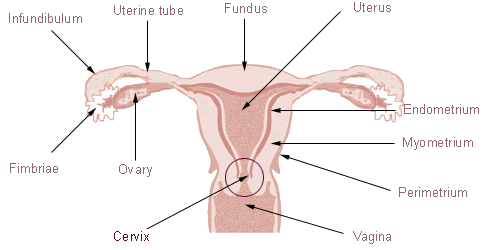 Cryoablation can (and should) be used to operate on fibromas, and in general on all recurrent tumours of the cervix with no other surgical options (1). Numerous studies have further demonstrated that thermal ablation techniques present no disadvantages if compared with other classical techniques (2). Needle-shaped cryoprobes are used if they have to be inserted into fibromas, or shaped like a suction cup if they must be placed on the cervix. The procedure is generally performed under direct visual control, and not necessarily with the assistance of an ultrasound scan.

The uterus is an organ in the female genital apparatus whose main function is that of hosting the embryo, and helping it so grow during the period of pregnancy. It is located between the bladder and the rectum, and can be reached through the vagina, on whose surface the cervix appears.

The uterus and the cervix can be home to benign and malignant tumours.

There are two main types of malignant tumour phenomena that manifest in the cervix and in the neck of the uterus: they are squamous cell carcinoma (8 cases out of 10) and adenocarcinoma (little more than 1 case in 10). Lastly, a rare form exists with both tumour types combined. The organ however, is formed from tissues that vary both in their function and in their form, and this means that there are other malignant varieties for the uterus itself. These are uterine sarcomas, which originate from muscular or connecting tissue, or adenocarcinomas that are born from gland cells.

Cryoablation thus can, and should be used on fibromas, but it can also treat all those recurrent cervical tumours that offer no other surgical options (1). Several studies have further demonstrated that thermal ablation techniques have no disadvantages if compared with other classical techniques (2).

Fibromas can develop in three ways.

Inside the uterus (thus defined as endometrial), in the myometrium (that is in the smooth muscle tissue of the uterine wall) or outside the organ. As it is usually without symptoms in the early stages, gynaecological check-ups have a fundamental role in prevention and diagnosis.

In more advanced cases, where the volume is considerable and/or the number of symptoms is significant, the patient can suffer abdominal-pelvic pain, various kinds of urinary disorders, such as dysuria, troubles with the normal menstrual cycle with random bleeding phenomena, or constipation; in more serious cases, a uterine fibromyoma (or uterine fibroma) if untreated, can lead to sterility or recurring miscarriages.

The cryoablation of these benign tumours of the uterus is a technique that is applied by laparoscopy. The uterus reached by inserting cannulas inside the abdomen and then inflating them with air to separate the anatomical areas (pneumoperitoneum), and the tumour is located (with or without ultrasound scan guidance). One or more cryoprobes are then introduced inside it according to the size of the uterine fibroma, followed by the freezing and death of the tissues. Then the cryoprobes are removed, and one waits for the frozen tumour to be slowly reabsorbed.

Tumours of the uterus typically vary in nature: cryosurgery is essentially useful for precancerous lesions, more than for full-blown tumours, which require surgical removal (3). Therefore the use of cryosurgery is substantially limited to pretumorous conditions at the neck of the womb, which can be reached through an approach that uses colposcopy, that is using a vaginal speculum.

In these cases, a special type of cryoprobe is applied to the area that freezes the tissue until it dies. All of this is performed without anaesthesia because it is not a painful therapy. In fact, the ablation of the tissue also has a pain-relieving function (4).

Thermal ablation of precancerous formations will be reabsorbed by the organism without leaving scarring, thus enabling later pregnancies (3).