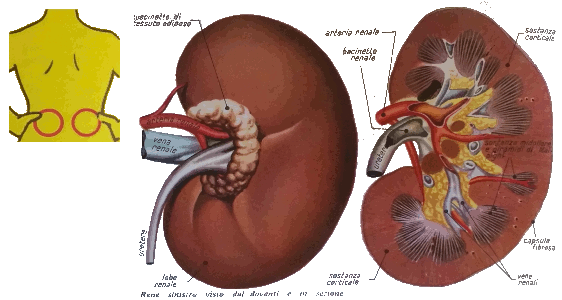 In renal cryosurgery we use thin needles - the cryoprobes - which are inserted inside the tumor under CT or ultrasound guide. Cryosurgery allows the kill of kidney tumors with a percutaneous technique and under local anesthesia with or without sedation. The percentage of healing, in suitable cases, is equivalent to that of the so-called partial, open-air, robotic and laparoscopic surgeries (2). Therefore cryosurgery is one of the most advanced and effective choices for the treatment of these kind of tumors (3).

The kidneys are twin excretory organs, which, together with the urinary pathways, form the urinary apparatus. They are two relatively large organs  (12x6x3 cm) located to the side of the spinal column in the lumbar area. They perform various functions, from purifying the blood and regulating its pH, to keeping the water balance in bodily fluids.

The kidneys are mainly excretory organs, but they also perform other functions:

Generally, kidney tumours originate from the proliferation of malignant cells within the renal tubules (or nephrons), or they are neoplasms from the fibrous tissues (that cover the organ itself). In 90% of cases a tumour is an adenocarcinoma of the cells that cover the nephrons, and in 2% of those cases, the cancer is bilateral, and is present that is, in both kidneys. Other cases are generally sarcomas in various forms, dependent upon the tissue in which they originate. Even if at initial stages a tumour does not seem aggressive, its central location in proximity with several other organs makes it very dangerous: the most common metastases are in the lymph nodes and in the lungs (55%), liver and bones (33%), followed by the other kidney, the brain, the spleen, the colon and the skin.

The diagnosis of these tumours is often by chance, or sometimes as the result of medical examinations requested by patients following the appearance of initial symptoms, such as pain and bleeding.  A urologist may, with the assistance of a simple ultrasound scan, distinguish any cysts from a solid mass and may, in certain cases, request investigation by means of computerised tomography (CT), urography or magnetic resonance (MR), which are the most refined and useful tools for a sure diagnosis.

Given the importance and the delicacy of the kidneys, it can be useful to approach an alternative surgical technique to partial (PN or partial nephrectomy) or radical nephrectomy (TN or total nephrectomy). This is especially true when there is a risk of collapse of renal function and the resulting need of dialysis.

Cryosurgery enables the removal of tumours using a percutaneous technique under local anaesthesia, obtaining a level of cure that is virtually the equivalent of those of so called partial, open air, robotic and laparoscopic procedures2, for the treatment of these tumours3.

Another aspect that brings cryoablation to the forefront as a surgical choice, is the possibility of keeping and maintaining a larger quantity of renal tissue: in fact there is no need to comply with the same oncological safety margins required when operating with a scalpel.
In this way the influence on the preserved renal function is greater compared with other techniques, and the patient heals without the side effects related to surgical operations, and the scarring formed by the incisions required for robotic or laparoscopic surgery.