Elephant man; bone metastases and pain therapy; super selective ablation of tumors of the kidney, prostate, lungs and liver; cryo-chemo-immunotherapy modulated: These are the new frontiers of cryosurgery

Cryosurgery allows you to selectively destroy tumor areas of different shape and extension. The aid of the Tac and dell'ecogra fi allows the identification of tumor masses, the input point and the number of cryoprobes necessary to the treatment. The cryoprobes have the shape of thin needles and have various diameters to be used according to the section of the lesion to be treated. They are equipped in their interior a sophisticated micromechanical structure consists of injectors and heat exchangers which, by exploiting the effect of Joule-Thompson, liquefy the noble gases compressed and expanded inside them. Will these liquefied gases which, boiling inside of the expansion chamber located in the tip of the needles themselves, will lower the temperature in the surrounding tissues fi no to -185 ° C.

The cells of the neoplasm, after being necrotic by the action of cold, dissolve and reabsorbed leave place to a scar tissue. Cryosurgery is recognized according to the criteria of evidence-based medicine in the world and is appreciated as a minimally invasive ablation technique. Even in Italy is spreading at hospitals and institutes for research of cancer, thanks to the contribution of the company CRYOSERVICE (www. CRYOSERVICE. It)

The CRYOSERVICE, based in Trieste, was founded in 1999 and is engaged in the research of new technologies in the electromedical and biological.

He has established itself in Italy as a leader, not only in the sale of equipment criomedicali but mainly in the organization of "service" for cryosurgical interventions in private and public health facilities.

The CRYOSERVICE collaborates with national and international centers of cryosurgery most prestigious and with the American group Endocare, a leader in research on the use of low temperatures in medicine and biology, which is the sole agent for Italy.

From this amount of experience the company has developed a high quality service, unique in Italy, which allows it to provide an apparatus for cryosurgery system that has temperature control with direct command of each cryoprobe, including ultrasound with biplane transrectal probe (linear or convex), and to arrange for the supply, transport and disposal of the gas and the equipment "on site", the conduct of that operation in the course of operations and training medical and technical.

Among the best known exponents of international reputation in the field of cryosurgery a special mention goes to Dr. Franco Lugnani, Trieste, president of the International Society of Cryosurgery (www.sociegrofcryosurgery.org) and forerunner of the technique in Europe since 1993.

"Cryosurgery - explains Dr. Lugnani - was created to care for prostate cancer in the US in the early 90s, and have been exported for the first time in Europe in 1993 at an international conference organized just in Italy, Trieste, in conjunction with the activation of the first unit of cryosurgery high-tech and early intervention of Italian patients with prostate cancer. Since then, there has been significant progress both from a technological point of view and from a doctor: it has gone from prostate cryoablation in toto to the focal treatment of the same, similar to the treatment of breast with quadrantectomy, without demolishing areas healthy gland, thus allowing not only the optimal preservation of urinary continence, but also the maintenance of sexual potency. Progress has also been made nell'ablazione super selective tumor of the kidney, lung, liver with preservation of the healthy part of the organ. "

The news emerged at the 14th and 15th Congress mmondiale of ISC, held respectively in Beijing in 2007 and in St. Petersburg in 2009, is the application of cryosurgery to bone tissue tumors (primary and metastatic), and as a treatment for pain, only true solution and able to bring a bene fi in the great majority of cases already a few hours after surgery, both as therapy of large tumor masses that would otherwise be removed with much more radical interventions.

"Our experience over the past 15 years - continues Dr. Lugnani - allowed us to use this technique as an aid to radical surgery in diseases like" Elephant Man "and in advanced cancers giants very popular in Asian countries. It utileinoltre observe that the use of traditional cancer therapies associated with cryosurgery allows a further application of the same. "

In fact, the speci fi c, "is to study the association of micro doses of chemotherapeutic agents for the mouth with the injection of dendritic cells (white blood cells special extracted from blood from the same patient and capable of activating the immune response) in the tumor destroyed by the cold, to obtain well targeted and selective activation of the immune system against the tumor itself. " 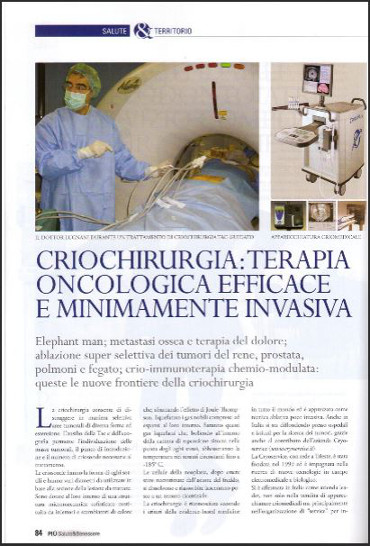