Franco Lugnani was the first European doctor to use cryosurgery high technology in the field of urology and, for years, traveling the world to illustrate this technique, no longer experimental

The technique crioablativa is the destruction of neoplastic tissues using ultra low temperatures. The beginnings of this technique dates back to fifty years ago. However, it is only a game from the nineties that is refined and spreads throughout the world. A pick-up driven by the advent of Tac and dell'ecogra fi, which allow an exact view of the ball of ice that is formed within the tissues. Dr. Franco Lugnani, urologist and president of the "International Society of Cryosurgery", explains its advantages.

Doctor, she was my first to use it, especially in its industry sector specific, urology.

"I started, and I was the first in Europe, in 1993. I have since had the good fortune to work with surgeons belonging also to extra-urological branches. I have traveled the world educating many colleagues about the use of cryosurgery. It is, by now, a well-established technique and no longer considered experimental by about ten years. Suffice it to say that the American Urological Association has included among the "Best Practice Policy" during the work of a special commission that occurred last spring. "

It is, therefore, of a practice to take into account also for the removal of prostate cancer?

"Of course you have to choose the candidates to crioablativa. Even today the most widely used technique for prostate cancer is radical prostatectomy open. This, however, is not always applicable, since many patients too old to undergo an operation so radical or because they simply opposed in undergo a practice so invasive. Alternatively, you may use the radiotherapy, but this one has its contraindications tions. And then cryosurgery may take over providing results comparable to those of other

The effect crioabiativo complete, requires the achievement of a temperature of at least -40 C and maintaining it for a minimum of about sixty seconds. As the cold damage statistical, you must repeat the same meeting the application source cooling for at least two consecutive times interspersed with a warm-up period of about ten minutes. The result can be proved in time by biopsy, cytology, radiological investigation with and without contrast. To make maneuvering crioablative sources are used cold that convey where needed through special instruments denominated cryoprobes. These cryoprobes are inserted into the target areas or are on top of them with open technique, endoscopic or percutaneous. It is always necessary to use a system of adequate and immaginologia thermometers detection at critical points.

Cryoablation of solid tumors performed percutaneously, guided ecografca or tac, allows you to treat cancers of the prostate and kidney, liver, lung, bone, soft tissue, and nerve tissue with a minimally invasive technique. The pain and discomfort to the patient is minimal ensuring a faster postoperative recovery and a very small hospital, usually just one night. Infectious complications and emorraglche are lower than other similar techniques and careful control of the local extension of the treated areas can significantly reduce the risk of damage to organs vicini.Vale is worth noting that in some cases cryosurgery allows to offer patients a treatment option even when other therapies are not considered possible or effective. For example it is indicated for patients solitary kidney, already undergoing surgery dmolitiva structure suffering from cancer and then with new functional impairment relative thereof.

For additional with a quantity of possible complications, however, lower.

"In the kidneys the whole is even more interesting. Until recently, even when diagnosed a small kidney cancer, it was completely removed with surgery to cut open. Later it moved to the less invasive techniques that were removed only part of the organ by laparoscopic technique. With cryosurgery, however, it has made it even easier for the patient. Let us assume, for example, of having to intervene on a patient who has a tumor of about three centimeters. This will be submitted to local anesthesia and, guided ultrasonography fi c and tac, will activate the cryoprobes within the tumor and the patient can return home the next day without having suffered cuts of any kind or heavy anesthesia. In addition, more importantly, it causes minimal damage to the healthy kidney tissue. "

She has had opportunity to deal with different cultures and communities that medical-scientific. What elements have impressed during his travels informative?

"I've known civilization and mentality very different. I find it fascinating that in very civilized countries like the US or Europe, the techniques crioablative and cryosurgery in general have a huge appeal. This is because the patient to seek to take advantage of a minimally invasive treatment.Instead, the least developed countries, we are witnessing a very different approach towards the disease. For example, in Indonesia we find ourselves in front of the three worlds, one Hindu, one Muslim and one, minority, Christian. And also being a poor country on average, it follows that for religious reasons and the behavioral habits patients tend to go to the doctor with cancer already very advanced. That is the opposite of what happens to us. "

What does that entail?

"The diseases being diagnosed in an advanced stage are more susceptible to traditional surgical techniques. And cryosurgery is in these cases a means to treat them optimal. Of course, we can not always heal them, but at least we can remove a large amount of tumor tissue without affecting mutilating. This element, if we speak of the Hindus, it is important in that it respects the will, in the event of death, to keep the body intact, just as it was generated. Instead, a Muslim cleric level, where there is a strong sense of decency and privacy, especially for women, interventions demolition felt such events dishonorable. For this non-mechanical material removal with mini invasiveness becomes a technique considered excellent. Besides, the costs are very low so it is economically well accepted. "

In Italy, however, that there was feedback?

"The medical community Italian is somewhat open and innovative. In other ways, however, it is extremely rooted in tradition. So in Italy we see the most of progressivism simultaneously at maximum preservation of classical positions, do not say bad, simply consolidated. There are more fierce guardians of tradition close to the most daring innovators. Then both situations are coexisting. This is intended to be interesting and useful as the continuous comparisons and debates scienti fi but often, unfortunately, it slows down the timing of dissemination of therapeutic advances. Do you think for the care of prostate cancer, it took fifteen years for the technical crioablative were acceptable. "

What do you expect from the future?

"The techniques crioablative are spreading, they are now universally accepted and are under the eye of all interested specialists. In particular I follow closely a number of studies that we are carrying out in collaboration with some American groups. The project aims to establish the effects of low temperatures on tumor tissues in stimulating an immune response. We are trying to stimulate some kind of autovaccinazione cold tissue. They are extremely sophisticated techniques involving the use of contributions immunological, pharmacological, and Cryosurgical cancer. This is the future of medicine. It is oriented towards the use of increasingly multidisciplinary techniques, less invasive, less demolitive, more easily controllable and with fewer complications. 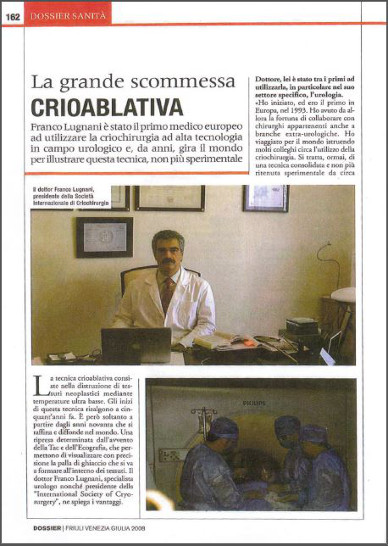