Franco Lugnani, urologist and president of the International Society of Cryosurgery, showcases the latest scientific advances in surgery to treat prostate cancer and adenomatous.It lets out a cry of alarm before a cultural attitude less and less attentive to prevention

Treating tumors in advanced without having to implement any surgery: a frontier until a few years ago considered almost unattainable if not utopian. But the development of medical science has once again demonstrated its development potential. In particular, in the field of urology, the news is relevant, especially for what concerns the quality of life of patients suffering from serious diseases. Talk back to Dr. Franco Lugnani, known urologist and president of the International Society of Cryosurgery. Already promoter and leading expert of crioablativa technique, which allows the destruction of neoplastic tissues using ultra low temperatures, Lugnani explains how, thanks to the laser, it has come to a revolution so important that it can be defined, according to the doctor's words, "Copernican" .

"We are in the operating room. You see cars, but no belly open and no blood. The patients in question, are also suffering from severe forms of cancer, unresectable. In practice we are witnessing the application of minimally invasive techniques in order to operate diseases once treatable only through heavy interventions. " Then more technical and less surgery? "It is high-tech therapies with the aim of curing diseases majoritarian I refer to patients whose condition is no longer curable. But not for this we must work to make them live better and longer. "

When he speaks of "major illness" in urology What's this?

"A prostatic diseases, which can be divided into two groups. The first is of a tumor, the second benign. As for the treatment of cancer, today we can make use of various techniques, including the cryosurgical, I deal in person. When, however, there is a malignant disease but an adenomatous prostate, we can turn traditionally three hypotheses: medicine, surgery on his stomach open or endoscopic resection transorettale, which is the gold standard of therapy for adenomatous. " The assumptions, however, have widened. "The big new feature is the laser. In particular, the most effective is the "green light", which emitting a green light beam high power is akin to red blood cells. Put simply select the green blood cells affecting only those red, burning and heating up the tissues that, in this way, you VA- porizzano. This represents a great step forward because using the green light laser there is practically bleeding. As a result, they avoid the long-term care, long use of the catheter and the risk operators. The patient can go home the next day but the day it has been treated. " '

What changes, especially compared to the more traditional techniques of intervention?

"In my opinion we are facing a real revolution. Once it considered the effectiveness of treatment dell'adenomatosi prostatic proportional to the amount of tissue removed. With the laser, however, it is completely different approach. lnnanzitutto you can create a channel within the prostate broad enough to ensure that the patient is well and urinate smoothly. In the second place is no longer required the removal of the tissue, which would entail risks heavier, since the green light laser allows vaporization photodynamic tissue ptostatici ».

A major revolution, then, like the one she already widely in-depth on the technical crioablatîve.

"I want to emphasize the importance of using minimally invasive techniques. crucial because we have to guide developments in medical research into treatments that meets the quality of life of patients. The experience that I'm living with techniques criochirurgiche is that effect positive. Finally these techniques, no longer experimental but already widely recognized, are used in the world for the treatment of cancers such as prostate, kidney, or lung. Addiritttua researchers at Johns Hopkins have argued that these techniques are the gold standard for the treatment of large renal tumors up to 5 or 6 centimeters.

All patients can turn to technical crioablative or laser?

"Not everyone, unfortunately there are some subjects on which you can not apply them. It must be said, though, that in most cases these techniques work very well, like surgery. Ago almost carried

"THE GREAT NEWS AND FORMED BY LASER. IN PARTICULAR, THE MORE EFFICIENT AND THE "GREEN L | GHT" WHO issuing a BEAM OF GREEN LIGHT HIGH POWER AND COMPULSORY TO RED BLOOD CELLS. IN WORDS POOR THE GREEN SELECT l BLOOD HITTING ONLY THOSE RED, burning and overheating FABRICS THAT, IN SO This deck, vaporize "

THE ADVANTAGES OF GREEN LASER

The fotovaporizzazione laser prostate with green laser Iight is the latest and most innovative technology used in the treatment of prostatic adenomatous. Besides 400- thousand patients we have already been treated worldwide with this technique. Among all the laser in use is a special case because the beam of laser light is fi ltrate from a crystal that selects the frequency of 432 nanometers which corresponds to the green color. Such a beam of high power light is conveyed along an optical fiber special equipped at its end with a mirror at 45 degrees. In this way, the beam comes out of the fiber at right angles. The optical fiber is inserted into same by means of a special cystoscope into the urinary channel that runs through the prostate (prostatic urethra) and then activated by the surgeon. Tissues subjected to laser vaporize into gas thus realizing a true pro-ere planing or laser boring channel prostate. The affinity of the green with the red of the red blood cells also ensures a low bleeding treatment. The patient is discharged, the day after, generally without catheter.

"I want to emphasize The importance DELL 'USE OF TECHNICAL MINI INVASIVE. FUNDAMENTAL WHY WE ORIENT DEVELOPMENTS OF MEDICAL RESEARCH TO TREATMENT THAT RISPETIINO QUALITY OF LIFE OF PATIENTS *. EXPERIENCE THAT I'M LIVING WITH TECHNICAL CRIOCHIRURGICHE It is DO SO POSITIVE '

effect, for us doctors, find out how a radiological technique can be equivalent to that surgery, his stomach open. Today the use of cryosurgery is also fi nalized soothe know fi erence in patients who have tumors metastasized to the bone. These patients are usually in advanced stages of the disease and suffer horribly for bone metastases. Their quality of life is terrible. Being able to help these people with a minimally invasive and VE- Dere the patient that the next day is already much better it is for me a great satisfaction. "

The medical community as Italian reacted before these new techniques?

"After a very cautious start and anchored to the traditions, I am proud to say that currently important centers of absolute importance and national reference as the Institute of Cancer in Milan, one in Rome and one of Basilicata, use cryosurgery to treat some pathologies, obviously not for all.But a little 'time the speech is widening. Of course it takes time. "

Turning to prevention, because it can affect within urology?

"It is essential especially in the prostate. Without prevention risk ending constantly faced with medical conditions so advanced that, unfortunately, you can not do much. And prevention should not only concern tumors. It must also address alfinsotgere delradenomatosì prostate. If you expect to intervene excessively risk compromising the bladder, the results are worse than those that might have been achieved as a result of regular visits with your doctor urologist. The drama, however, is another. "

What are you referring?

"Being the prevention, sometimes, difficult and expensive, is gaining a dangerous attitude that leads patients to think that maybe" it would be better not to do it if the results are not as striking.... " A mindset that is spreading internationally especially for prostate care. This is shaping the paradoxical situation in which we can not cure tempoi patients who need them and we risk treating excessively others who actually do not require invasive therapies. A contradiction dramatic, frightening, which is unfolding in a conception artualistica and insurance medicine, where economic resources are misdirected to the detriment of the final result, ie patient care. "

A problem above all cultural?

"Today's society of fronds idea of ​​man understood as a kind of" physical machine ". But this is wrong, especially in the medical field. If we consider the man as a spiritual being, things change. Be careful, do not get me wrong. Despite having a conception in the holistic medical science, I support the importance of medicine and technology. But, at the end, when you look at the patient in the eye and shake his hand, all this has nothing to do with machines. The quality of the relationship between doctor and patient is essential in my opinion for the purposes of a more rapid healing and a better quality of life for those who live in a state of disease. Instead, a mechanistic view of care, remove the user from doctors and, consequently, does not facilitate the promotion of a culture devoted to prevention. " 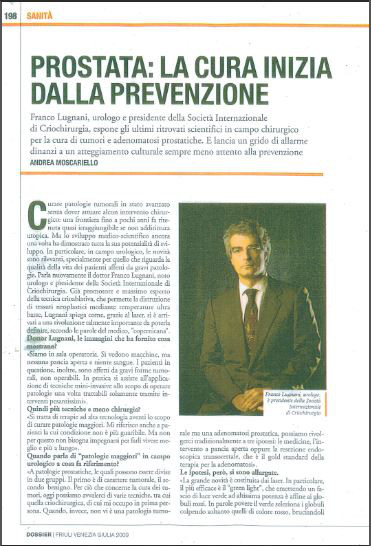