The surgeon who comes from the big chill
Press review

The surgeon who comes from the big chill

A pioneer in Europe of Criochiruqia

The surgeon Franco-Lu gnani Trleste was born in October 28, 1954. He graduated in Medicine at the university in the capital in 1979 he specialized in urology in 1983. Currently he serves as President of the International Society Of Cryosurgery. Consultant structures cryotherapy in Europe Dr. Lugnani is particularly committed abroad- USA, South America and Asia as well as a lecturer in the centers responsible for ensuring implementation of the most modern techniques of cryotherapy. In Trieste it carries on business of medical surgeon in the seats of Sanatorium Trieste (Via Rossetti, 62, tel. 040 -390 096) and at the Nursing Home Salus (Via Bonaparte, 4, tel. 040-3171111). More information on the activities of the urologist may be drawn from the Trieste site www.lugnani.com where among other things you can also learn about the artistic production, especially based on poems. Verses apart from the site urologist Trieste is possible to extrapolate a comprehensive treatises related to the dictates of historical and technological cryotherapy treatment in cancer cases, especially on prostate and kidney. Cryotherapy (or the destruction of diseased cells through cool down with temperatures until -200 °) which turns out to have been experienced at the turn of the 60/70, a first pioneering phase lasted a few years before being shelved later to some complications. The technique was resumed and completed around the beginning of the 80s.

Technological advances and the support of ultrasound instruments have subsequently allowed to reassert the quality of the art, with a certain percentage of success in cases of prostate cancer. Franco Lugnani is among the most active performers and international experts.

The new frontier of international medical engaged in cases of kidney cancer or prostate cancer with roots in Trieste. His name is Franco Lugnani, urologist, professor and pioneer in the technique of cryotherapy, or, in other words, the eradication of diseased tissues through a sort of burn-induced temperatures hovering about - 200 ° circa.A so its also cinquantunenne surgeon Trieste can be defined as a "prophet missed at home."

Maybe not for long. For years Franco Lugnani ranges mainly abroad, contact (or forming) international specialists and successfully implementing therapy "alternative" to the surgery or with a basis of radio or chemotherapy.

To talk to him is especially the facts, all the documents certifying resolutions, often only after a final action, in large series of kidney cancer or prostate cancer. Many activities abroad said. Trieste is back however to frame recently an important stage of its research in the application of cryotherapy. A unique operation, carried out in early February in the Nursing Home Salus, a private facility, as required by the order still current local therapy like, contritely to some health care companies scattered throughout the peninsula: "We performed surgery for kidney cancer on an elderly patient, octogenarian, thanks to a technique called minimally invasive. This was possible through the laparoscopy, - explains Franco Lugnani- ie applying small holes made ​​in the belly of the patient we were able to reach the kidney , "prepared" the tumor and entered the center of the same probe capable of generating very low temperatures, approximately -180 °. This resulted in the death of the tumor to frostbite. " Semplice.Di seems certain intervention is unprecedented: "In the whole region of course not - said the surgeon -. In Italy there are already other teams, one is made ​​up of my students trained in Jesi and the other colleagues from the St. Raffaele. Something like Trieste we had supported in 1995 - remembers Franco Lugnani. The question is what are the conditions of the patient operated in Trieste:

"Everything went very well - reassurance -. We had an elderly, suffering from a kidney cancer fairly advanced. Our intervention prevented further problems and given expectations of quality of life considerable. Expectations that the state of the disease would certainly allowed ".

In this respect lies one of the peculiarities of the therapies that Franco-Lu gnani disseminates in the world: the feasibility even in people in old age, the residual sequelae and the margins of life called "qualitative".

"In these cases, when operating a patient get older and therefore by definition critical, the precautions are still intense and special - adds the doctor Trieste -. The impact is considerable, beyond the cases and diseases. The benefits must be total, absolute. Otherwise nothing is done. Indeed, I must also say that the same patient was a candidate for a double intervention. In fact, we wanted to "attack" another diseased organ, the same technique. But, OK with colleagues of the team, we decided to postpone the surgery. We do not want ever to force nature and time. We stopped by mutual agreement, including the patient. We will make the second round of surgery when the time is ideal. "

The operation carried out in the capital, beyond the comforting result, it puts the emphasis on the degree of progress in the field of cancer issues. That we can heal is not yet a true axiom but everything indicates new paths illuminated by progress, technology, professionalism and positive case studies.

Also in the room: "The last speech made to the Salus door, I think, to be able to apply in our city and in the whole region similar therapies in treating certain forms of cancer - said Dr. Lugnani -. This type of minimally invasive surgery It is a technique

very advanced. The literature confirms this right in the case of kidney cancer. It is also defined in "saving kidney", just because it acts so as to be able to save the kidney itself. The organ is not affected or demolished. The functionality must be preserved if possible because I remember also the possibility of dialysis in these cases and for the elderly often result amounts to a very serious and difficult to bear. With Cryotherapy instead it is possible to remove the cancer retaining especially kidney function, limiting damage to a minimum. "

A Trieste that offers hope and making school. To increase the caliber of the transaction finalized in Trieste was also the medical team used during the three hours of surgery: "I had the honor and pleasure of working with Prof. Enrico Caraceni, distinguished colleague of Civitanova brands, expert in minimally invasive techniques, has worked for years with success in the application of cryotherapy in prostate cancer cases. In the operating room at the Salus have also had, say he also distinguished guest, Dr. Miure Kings London Hospital, one the temples of English medicine, known professor of international fame. He wanted to come to Trieste to closely follow the steps of action to implement its London facility to service not only prostate cancer but also precisely the kidney. "

Franco Lugnani was the first in 1993 to bring the prostate Cryosurgery in Europe and among the first to test the technique also iltre forms of cancer, including liver and even the uterus, working with a team of gynecologists of Ancona.

Specialization in urology led him later to stabilize in certain diseases but at the same time has been able to carve out an important place also as a teacher, even as authentic tutor: "After a period as vice president of the International Association of Cryosurgery have recently become president same reality - concludes specialist -. Under one roof there are surgeons from around the world that treat tumors with this technique. There are famous names but also especially professionals to form the best. For this I try to disseminate the most of my teaching experience. At the beginning you need someone, as is normal, to guide you step by step, hold you by the hand. The learning curve I hope will become as short as possible so that the specialty not only grow but allows the patient not having to never pay the price of inexperience. "

A surgeon from Trieste who also loves poetry and knows that his joke about this dichotomy marked presenting, from the pages of his personal website (www.lugnani.it) in the dual role of Dr. Jekyll and Mr. Hyde. You discover who the poet and who saves lives. Will be frequent contact with the freezing temperatures, it will be the constant travel from one part of the continent but the poetry on the transience of life seems to be one of his favorite scalpel ideals. 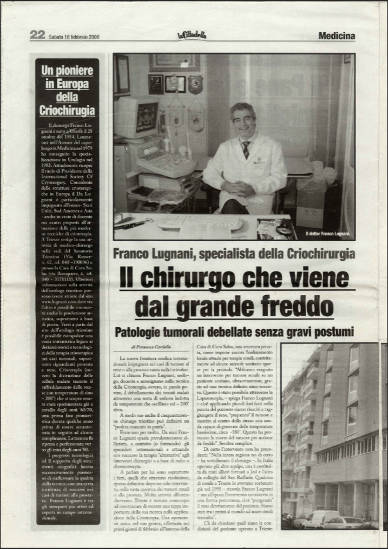