Dr. Franco Lugnani, graduated in Trieste in 1979 with a thesis on experimental vascularisation of bladder tumours with Professor Rocca Rossetti as Director of Urologic Clinic of Trieste. After obtaining in 1984 the specialization in Urology, Dr. Lugnani later his devoted his activity to the prevention and cure of Prostate cancer, and then expanded his interest into the minimally invasive therapies of solid tumours in all body location, including kidney, liver, lung, bones etc

Tell us about your medical activity and cryosurgery?

Soon after my degree as Urologist I became interested in the prevention and early detection of prostate tumours and to explore these issues I went in the early 90s in the United States as a student of Professor Fred Lee of Ann Arbor to the Saint Joseph Hospital and later at the Prostate Centre of the Crittenton Hospital in Detroit.

It was during one of my stays in the US, accompanying my Teacher at Allegheny General Hospital in Pittsburgh, I have come to know the Colleagues who dealt with a new technique of minimally invasive treatment of tumours: cryosurgery.

Then the applications of the technique were limited to prostate tumours and tumours of the liver.

The possible implications and effectiveness of the method it has appeared immediately obvious.

Meanwhile I became a Consultant to Surgical Pathology of the University of Ancona where, along with the director Professor Emanuele Lezoche (a famous precursor of several innovative surgical techniques such as laparoscopy) I began to also treat liver tumours.

I was also president for six years at the International Society of Cryosurgery, which brings together from all the world's the top experts in the field and we did the last world congress in Trieste at the ICTP Miramare. Congress ended with great success and satisfaction.

Cryosurgery is a method, known since 1800, but only since 1990 has evolved into high technology and has reached maturity thanks to the possibility of intra-operative monitoring guided by ultrasound or CT scan.

Which technique is used in cryosurgery?

The technique uses thin needles that generate in the tip, by means of sophisticated apparatus of micromechanics in which circulates nitrogen or liquid argon, cryogenic temperatures up to 190 degrees below zero.

The diseased tissue, the cancer properly cooled will receive irreversible damage, die and are then be reabsorbed by the body, leaving in its place a scar tissue.

Basically how you proceed?

By means of ultrasound or CT, the shape and size of the cancer is identified and then we monitor the insertion of the cryo-needles into the same tumour. After insertion of the needles the cryogenic machine is activated and we can visually follow the development of the ice into the body through ultrasound or CT. Always controlling the extension until the total coverage of the diseased areas.
Thanks to these systems we will prevent that nearby organs are damaged.

In the same session we repeat the freezing cycle twice, each of which cycles lasts about 10 minutes.
Then we heat up the probes and the ice melts within 20/30 minutes.

In the following days and weeks the dead cells dissolve and are reabsorbed leaving in place a small scar.

How long the patient can leave the hospital?

The patient was discharged after a few hours or at most a day later.

Obviously, the ability to operate in a minimally invasive way allows to ablate cancers in patients that otherwise could be hardly operated with traditional more invasive techniques. It is very attractive even for patients at risk for the speed of recovery and the few of side effects.

Where it is used this advanced medical technology?

The method is in use in many Centers in Italy and in the world.

In Trieste at the Sanatorium Trieste in Italy among others I want to mention the Center Cancer Institute of Milan, Rome, Basilicata.

Cryotherapy is used daily in many of the most famous Centers in Europe, American, Chinese, Taiwanese, Australians: the King's Hospital in London at the Mayo Clinc or the Veterans Hospital in Taipei or the Clinic Puijvert Barcelona and many, many others around the world.

The cryosurgical technique is evolving, currently in addition to technical improvements are ongoing international studies to evaluate methods to stimulate the immune response against tumours that cryoablation causes and leads and I follow them with interest.
The first results of the pilot studies were very encouraging and we hope very soon to be able to bring those experiences in Italy that are currently available only at the level of experimental protocol in a few specialized institutions abroad.

You can prevent prostate disease?

An exception is made on the prevention and treatment of prostate diseases they both benign and malignant.

The PSA as a diagnostic test for the diagnosis of prostate cancer was recently put under discussion by its own discoverer friend Professor Richard Ablin Tuxon of Arizona who also spoke in Trieste on November 5th at the Teatro Miela. The problem must be understood in its proper light and is linked to the perhaps excessive frequency of biopsies which are subjected patients who have elevations even small values compared to "references to normal." This reference value is arbitrarily determined according to statistical calculations of probability that have little to do with the presence or absence of a tumour. Recent history teaches that greatly multiplying the number of diagnoses and interventions resulting in prostate cancer mortality in general has changed so little as to suggest that we are faced with an excess of care due to an excess of diagnosis.

The problem therefore lies in the proper use of all the available tests in order not to incur unnecessary excesses without making run risks of neglect.

I should mention that for prostate cancer in particular, are now spreading further selective approaches that are similar to lumpectomy in women. Or destroy, if possible, only the cancer in the prostate with technical focal targeted the cryosurgical without removing the entire gland as they do with assistance robotic, laparoscopic or open. In this way the risk of complications related deficits as reptiles or incontinence are minimized.

All of medicine and surgery evolve towards less invasive techniques, multidisciplinary, low impact for the patient and cryosurgery is presented as a tool tip in this scenario modern and highly sophisticated. The future of the method is even more interesting because of the possibility that we are exploring to use it in conjunction with other forms of therapy to get effective treatments combined and customized. 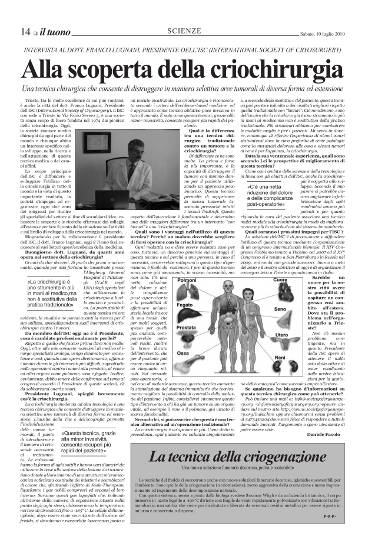